Skeletal signatures of TB (Bos et al. 2014)
Tuberculosis (TB) is an age-old disease that remains a major public health concern even today. The disease is thought to have originated in Africa sometime within the past 6,000 years. The origins of this disease in the Americas has long been a matter of debate.
​
Skeletal evidence suggests that TB was present in the Americas long before the arrival of Europeans in the late fifteenth century. Previous research showed that sometime within the past 1,000-1,200 years, seals transmitted TB to human populations living along the coast of Peru (Bos et al. 2014). As these people hunted seals for their meat and fur, the handling and processing of TB-infected seals was likely the mode of transmission of TB from seals to humans. ​ 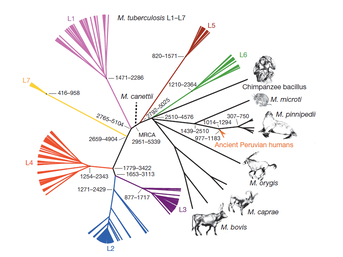 Phylogeny of TB including the ancient Peruvian strains (Bos et al. 2014)
​   Did these seal-derived TB strains spread all over the Americas or were they restricted to the Peruvian coast? Did the strains spread via human-to-human transmission or was another animal host involved in this transmission? Were these the same strains that caused TB in pre-contact era North America or were other types of TB strains present in the North (and if so, how did these other strains get there)?
​
To answer these questions, we screen ancient human skeletal remains for the presence of TB DNA. We use sophisticated ancient DNA extraction methods, target enrichment, and next-generation sequencing technology to reconstruct the genomes of ancient TB strains. By understanding the phylogenetic relationships among ancient and modern TB strains, we can answer questions about the origins and spread of this disease.

​​This ongoing project formed the basis of my doctoral dissertation research conducted at ASU, under the supervision of Anne C. Stone, Jane E. Buikstra, and Michael S. Rosenberg, and was in collaboration with Åshild Vågene, Kirsten Bos, Alexander Herbig, and Johannes Krause at the Max Planck Institute for the Science of Human History, Germany. Currently, we are in the process of publishing some new results from our study (Vågene et al., in preparation).

If you are interested in a collaboration looking at ancient tuberculosis in the Americas (or elsewhere), feel free to contact me.